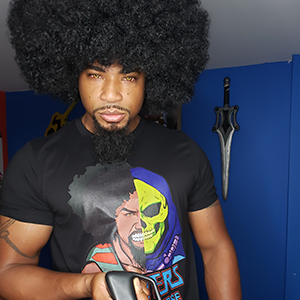 
I’ve been cosplaying since 2017 and I’ve done a number of characters that were personal to me. From Kratos to Sub-Zero to He-Man….I’ve never really done characters that were of the “bandwagon” sort. Just ones that I have a passion for. I’m best known as the “Afro He-Man” but I'd just prefer the cosplay "He-Man." I’ve been to the most recent SDCC as Press and have interviewed actors and composers on behalf of JVS YouTube channel. I’m a brand ambassador for Black Heroes Matter and Figure This in 3D. I’ve been trying my hand at acting these days to see if that’s a viable option for me creatively and financially seeing as how I'm a father of a 2 year old boy named Kaua'i. For his sake, if it doesn’t make money, it doesn’t make sense because I could be spending my time with him. There's a short film I've worked on based in Baltimore and I've been cast within the "Lost Cos" tv show that is a scripted narrative centered around cosplay. I've also been featured in 3 cosplay magazines in 2019....two of which I've made the cover for....the February issue of Cosplazine and the November issue of Cosplay Alliance Magazine. Men's Health ran an article on me and my impact within cosplay as a Black Man in April of 2021. I'm currently creating a series of PSAs aimed at educating Black children via my He-Man cosplay in animated form on streaming services. I've made deals with two services that are accessible via Roku TV and Amazon Fire TV devices. I am also hosting a Harvest Festival with KonsiderDis Radio for the children in Ward 7 in Washington DC this Halloween. I have been learning the various paths of cosplay but it’s been slow going. Sewing, foam-smithing…all of it is something I’m interested in becoming proficient in. My cosplay mission beyond having an outlet for my creativity is to push for the proliferation of minorities within mainstream media. I’ve been making some pretty sizable strides in that arena seeing as how my He-Man cosplay went viral enough for the writers of the DC Comics mini-series “He-Man and the Masters of the Multiverse” used my image within the final issue that debuted in April 2020. He-Sol is the brand new character that is based on myself and Sun-Man per the creator Tim Seeley.